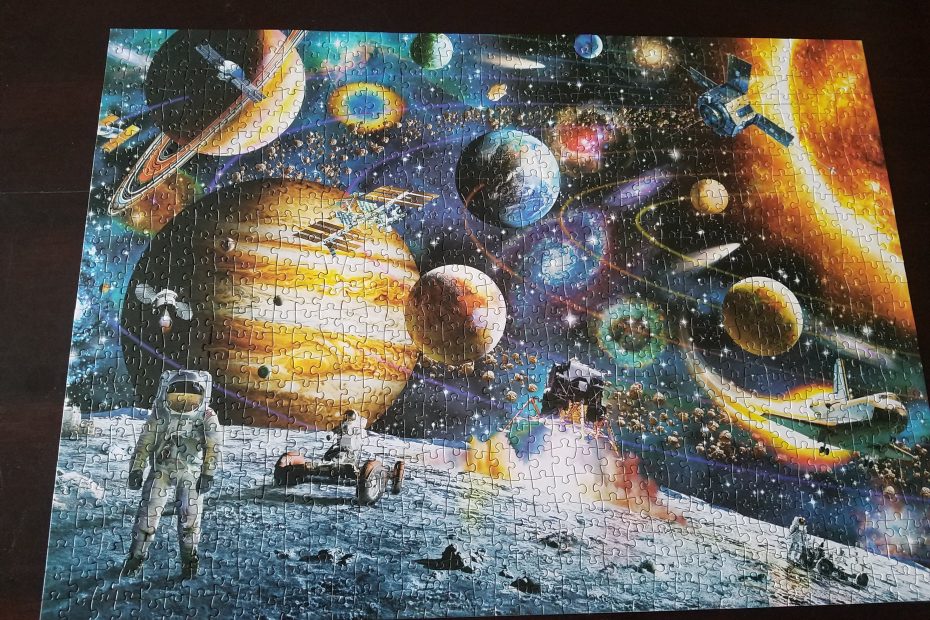 We wrapped up the Planets in Space puzzle last night, somewhat unexpectedly.  It was supposed to just be a few pieces on the way upstairs for the night, then it was suddenly an hour later and done.

This one turned out gorgeous (though the Tweeted photo has too much glare to see it well) but given that I bought it specifically because it looked pretty, that probably shouldn’t be a surprise. 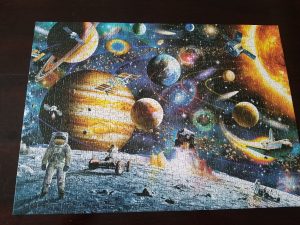 The completed Planets in Space puzzle.

The edges were pretty easy to find and put together. From there, Jenny worked on the Sun while I thought I would get started on the asteroid belt. I was horribly wrong, as while, yes, the asteroid pieces were somewhat distinctive, there were a lot more of them than I was thinking, so there would have been a lot of brute force that early on. Instead I switched to the rings of Saturn, then anything man-made (astronauts, satellites, etc.). Jenny moved on to Jupiter while I focused on the edges of the planets, at which point we had a spiderweb across the puzzle and it was just a matter of filling things in. The final pieces were on the surface of the moon.

One interesting thing with this puzzle was that the back included letters indicating the piece’s relative place in the finished product, which we hadn’t previously come across. I ignored them while Jenny only used them to determine orientation.

There was one piece we kept coming back to, certain it was part of a satellite that we just couldn’t figure out, only to find that it was actually the edge of a planet. Oops. There were also pieces that looked like they belonged to the Sun but were actually Jupiter, pieces we thought were clouds of dust from the lander that turned out to be a nebula, and a bunch of black (or nearly black) pieces that could have been the dark side of any planet so we just had to brute force it a bit.

It was fun, overall, though not incredibly difficult. I’ve already added some others from this manufacturer to my list so we’ll see them again.