Next Up: Christmas at Hogwarts

Yesterday, as we hinted on Instagram, a box of puzzles I ordered from New York Puzzle Co arrived, and of the three in it, I picked the 1000 piece Christmas as Hogwarts to get started! I really enjoyed the feel of artwork on the pieces in the Video Game Puzzle from NYPC, and as frustrating as the edges were on that puzzle, I really enjoyed working on that one. We even opened the box last night so I could find out if they used the same paper on the artwork (they do). 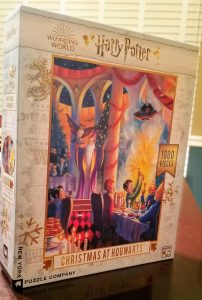 I’m also a huge Harry Potter fan (JK Rowling, not so much) and NYPC has a LOT of Harry Potter Puzzles. I even think we’ll be able to get the kiddo more excited about puzzles with this one, as I’ve been reading the series to her for the last few years.

From what I can tell from the picture of the puzzle on their website, we won’t have a solid border to work with on this one, and for that I’m thankful, because the video game puzzle had two pieces that were solid yellow and cut identically, which tripped us up on the border for awhile. The border here should be easier to put together, but there is a lot of shading that I expect will trip us up a little as we get started on this. There’s detail, but not a ton like the Country Manor house, so maybe that will make this one a touch easier?

I’m really excited about this one! We might get started tonight (1/6) but we might have an appointment get in the way of that.