Wrap Up: Christmas at Hogwarts

Here we are 10 days later with a finished (ish) Christmas at Hogwarts Puzzle from New York Puzzle Co! 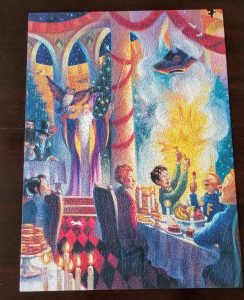 There’s always at least one or two spots when I’m looking for a hard to find piece that I swear up and down that it’s missing, and then find it almost immediately, or right at the end. This was not the case! We ended up in the dark floor and tablecloth bits for the last part to finish this off, and it became obvious that there was no hope finding this piece by the end. We took down our Christmas decorations and moved the couch back last weekend, so we can’t for sure say that it arrived without this piece. However, this was the most intentional unboxing we’ve ever done. We took every piece out of the bag one at a time, sometimes a handful at a time. We didn’t just dump it out and let fly like we’ve done with the last few.

As expected, the shading made parts of this incredibly difficult, and parts we thought were a part of one of the trees ended up being a part of the table cloth, or something we thought was meant to be in the right corner needed to be in the left with all the coral oranges everywhere!

As bizarre as some of these pieces are, we absolutely love the extra challenge that comes with the pieces cut like in these weird shapes. We continue to love these puzzles, and the list of Harry Potter puzzles at NYPC is long, we’ll definitely be seeing another one of these in the future!

Time to Complete: 10 days
Soundtrack: Long List! Something Rotten Original Broadway Cast Recording (which I’m listening to as I write this up), Hamilton Original Broadway Cast Recording, Various Epic Rap Battles of History (eagle!), Metallica, Goo Goo Dolls, Train, Matchbox 20, Hamilton Mix Tape and Guns ‘n Roses
Helpers: The kiddo jumped in for a little this morning, but gave up fairly quickly. She was distracted by her giant bag of science experiments that she got for Christmas (energy crystals! energy rod! You know, 7 year olds totally need more energy 😆)

This was a fun puzzle and I am still in love with how the pieces feel and look. It’s Clark’s turn to pick out a puzzle, so we’ll see what’s next together!