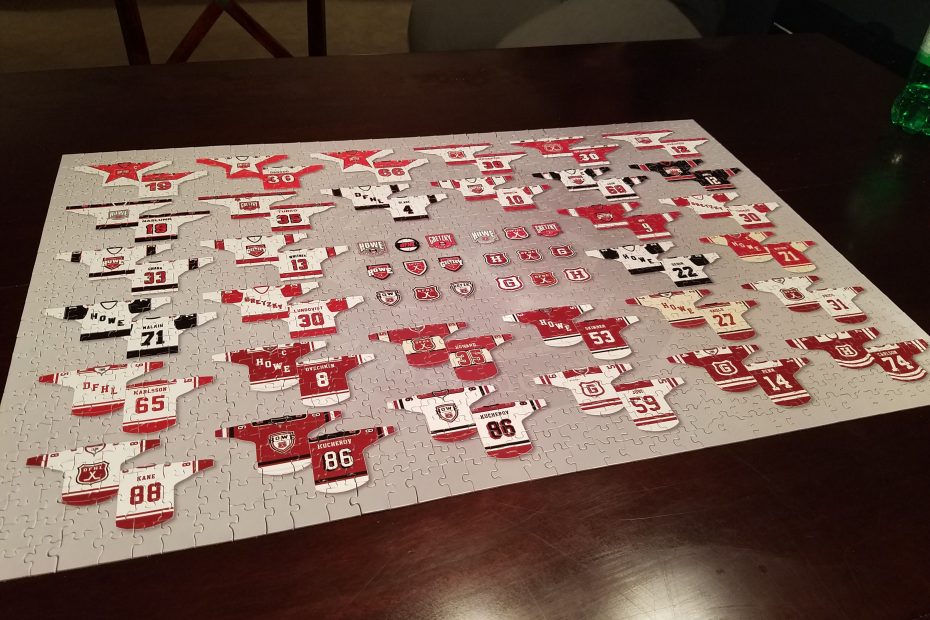 We finished off our custom DFHL All-Star jersey puzzle last night, deliberately timed to coincide with the 20th anniversary of the league’s first games. 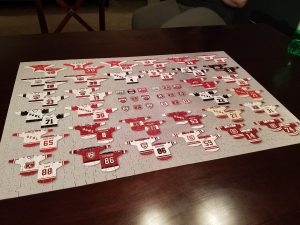 We took some time off from the puzzle to make sure to finish it on a significant day, so it ended up taking about a week but it wouldn’t have had we really been trying.

How hard the puzzle would be is something I was really curious about, because I designed the puzzle and had also designed all of the elements used to create the puzzle.  Theoretically, I should have been able to pull almost any piece and have a pretty good idea of where it should go automatically.  That turned out to be mostly true.  It was only when there was more than one instance of the same jersey design that I had to work to figure out which one that a piece belonged to.

Jenny, on the other hand, had a harder time with it.  So my takeaway is that any time you design a puzzle, it’s probably going to be easier for you than someone else.  We’ll probably try it again, sometime, though.

The other thing we’d wondered about with it being a custom puzzle was the quality we’d get from Collage.com.  It was good but not great.  I mentioned in the Next Up post for this one that the pieces were surprisingly glossy for what was supposed to be a matte print but because we’ve never ordered a glossy print from them, we have no idea if that’s a good thing or a bad thing.

We thought that we wouldn’t see any interesting piece shapes but it turned out there was some good stuff in there, so that was a nice surprise.  That said, there were definitely repeated shapes.  There were only two distinct corner pieces, each one duplicated, which was problematic given that all four corners were the same solid grey.  I’m pretty sure the cut of the puzzle was symmetrical. 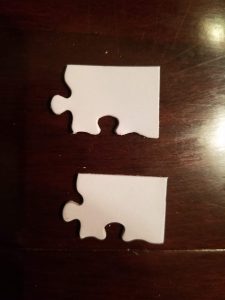 Additionally, the pieces fit together pretty loosely, which we don’t particularly like.

We’ll probably look to try a different vendor for our next custom puzzle but wouldn’t have a problem coming back to Collage.com if we don’t find anything better.  Assuming, of course, that we don’t run out of custom ideas before then.

For the record, our final night’s soundtrack was Zelda and Chill (my pick), followed by the Something Rotten Original Broadway Cast Recording (Jenny’s choice).