Wrap Up: The Solar System 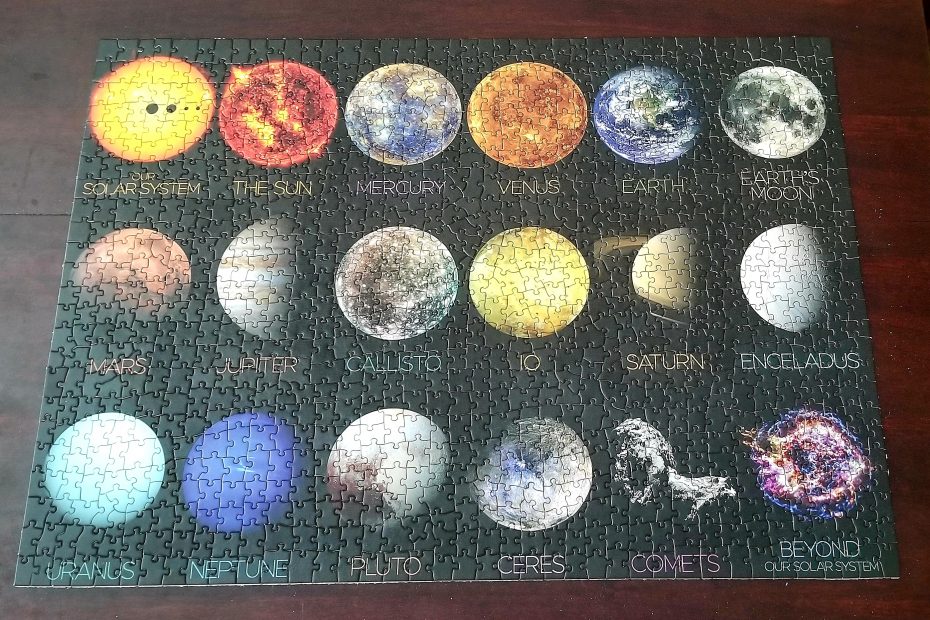 We took advantage of this frigid Saturday in Michigan to spend some time finishing The Solar System Puzzle and drink some hot cocoa.

As expected, the planets came together relatively quickly. It was a little weird, psychologically speaking, because you’d be sitting with what you know is all of one planet, and it’s in pieces. Next thing you know, it’s half together and you’re finding the pieces one right after the other. I had tried to put the border together first, but with it basically solid black it got frustrating very quickly.

Once we got all of the planetary bodies put together, and arranged in the order they were supposed to be in, the border came together easily. Due to the black background, and the fact that the various planets and moons were already mostly together, we were able to find the homes of black pieces with tiny bits of color so quickly that we were soon left with a ton of black pieces and no idea where they went. It wasn’t long before we resorted to brute force. About 75% of the pieces left were two innie, two outie pieces, so for a while it was a long process to find matches.

It took us a few hours to get down to the final few. Then the final one. And the final piece didn’t fit. There was one piece left and one hole in the puzzle for it to go. It did. not. fit. We found an excellent benefit to the puzzle being cut like a hot ‘n’ ready while trying to figure out where we went wrong. Clark was able to pick up the puzzle so we could look for pieces that might be in the wrong spot. Turns out it was only one piece that was in the wrong spot, right next to the hole we couldn’t fill. Rotate-o potato and boom! Finished puzzle. We were even able to flip the puzzle over to contact paper the back without using any boards to flip!

A successfully frustrating endeavor we got to solve together. ❤️