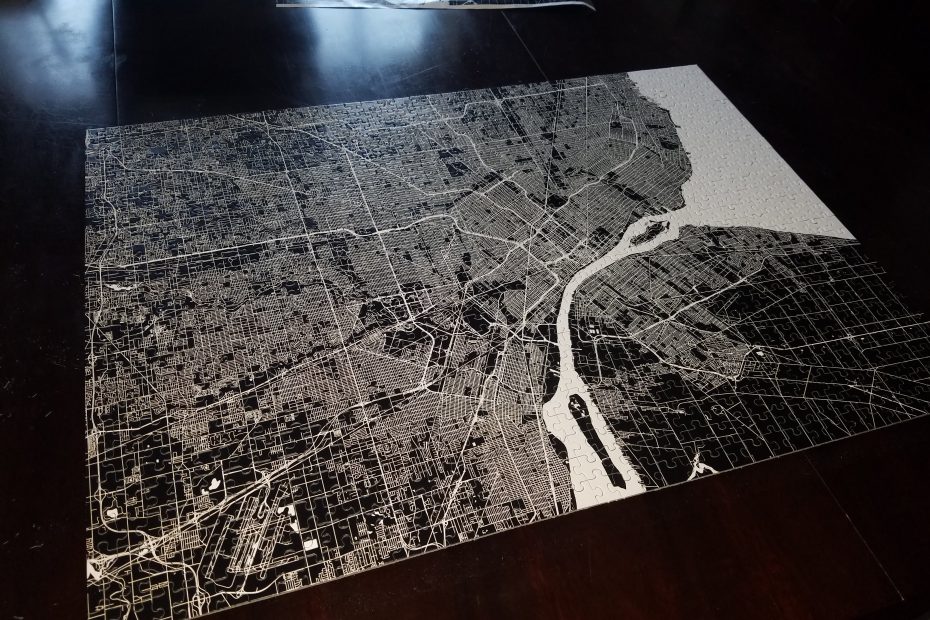 After over a month, we finished our Lantern Press Detroit map puzzle today and…  It’s hard to find words about this one. 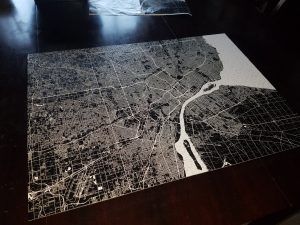 This one was hard.

I should be clear that it was not bad.  This was a great puzzle, in both construction and print quality.  Kudos to Lantern Press there.

But, while I bought it knowing it would difficult, I didn’t expect it would be this bad.  It was a slog.  We also had a bit of a personal emergency right when we were starting, so it was really hard to get going.

We started with the edges and then decided to brute-force the Detroit River and Lake St. Clair, figuring that it would be easier to take care of all of the white pieces than it would be to work on the streets.  Special guest puzzler Aims stopped by and took care of a bunch of the Canadian side of the river outside of Windsor, then I got started on Metro Airport.

I’m a big map guy, I love cartography and all that, so even though this was difficult, I kept going.  Jenny, on the other hand, quickly had enough of it.  She popped in and out for parts of the puzzle but didn’t do as much as usual.  As she put it:

After getting a bit of the airport done, I focused on things with straight, bold, lines, like I-96 and I-696 and I-275 and the Southfield Freeway and Telegraph Road.  This involved a lot of picking a piece, staring at the map to find where it belonged, then placing it in the puzzle in that spot.  Then the Lodge started coming together, then the area around Zug Island.  It was particularly fun to place pieces that represented the location of Joe Louis Arena, or Little Caesars Arena (though I think this map pre-dates that arena), or Tiger Stadium.

Eventually enough got done that Jenny rejoined me to brute-force what was left.  The final pieces were around Inkster.

Something I think would be interesting to try, just for comparison’s sake, would be a satellite photo puzzle of the same area, looking something like this: 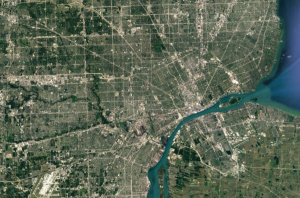 Satellite photo of the Detroit area, which could make for a good puzzle.

I’m sure one exists out there but we’ve got enough other puzzles lined up that I’m not ready to rush out and find it.

We keep all of our puzzles, either contact papered or mod podged and stashed in an artists portfolio.  This one, though?  It’s getting framed.  We’ve got a nice empty spot on the wall right next to the dining room table where we work on our puzzles and this belongs there.