Next Up: Coffee & Donuts 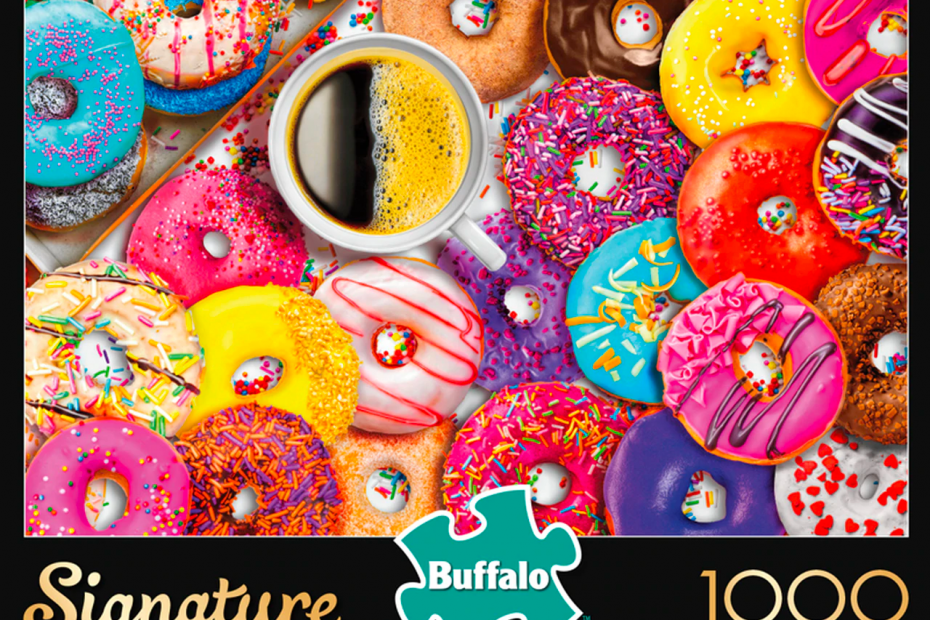 Around the time we started our Detroit map puzzle, we realized that we were starting to run out of new puzzles to try.  That wasn’t entirely true, as there was one I had hidden to give as a gift to Jenny, but we’ll get to that one later.  Nevertheless, we went on a puzzle-buying spree and I picked up a few from Buffalo Games to give a shot, including the one we’re trying now, the 1000-piece “Coffee & Donuts” by Aimee Stewart. 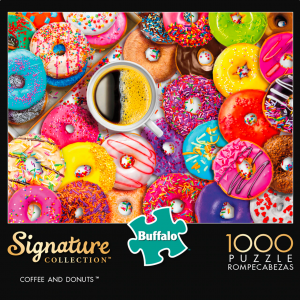 I couldn’t have known that we wouldn’t need anything new for our collection for another month but we finally made it through that Detroit map and cranked out “Talking’ All That Jazz” and here we are.

I picked this one because I wanted to see how Buffalo Games stacked up to some of the companies we’d tried previously and I thought that a puzzle with bright colors like these would be a good rebound from the monochrome Detroit map.  Coincidentally, in the time since ordering this, a new doughnut shop opened up in our town (a much-awaited occasion, as, despite having several local bakeries, the only decent doughnuts were from Tim Horton’s, which is a low bar for sure) so we’ve been able to enjoy actual doughnuts of late.

On unboxing, I had an immediate concern, as one piece was bent up and crammed in between the top and bottom halves of the box.  Theoretically, a piece in that spot could have fallen out, so I’m a little worried that we might have lost one already.  Aside from that, though, the pieces seem solid and lock in together nicely.  The finish is a pretty standard gloss and the colors are vibrant.

My guess is that we’ll follow our standard methods with this one, starting from the outside and working from there.  The frosting colors seem unique enough that I don’t think we’ll have a lot of trouble determining which pieces go where.  Who knows, though, I could just be feeling cocky after our last couple.