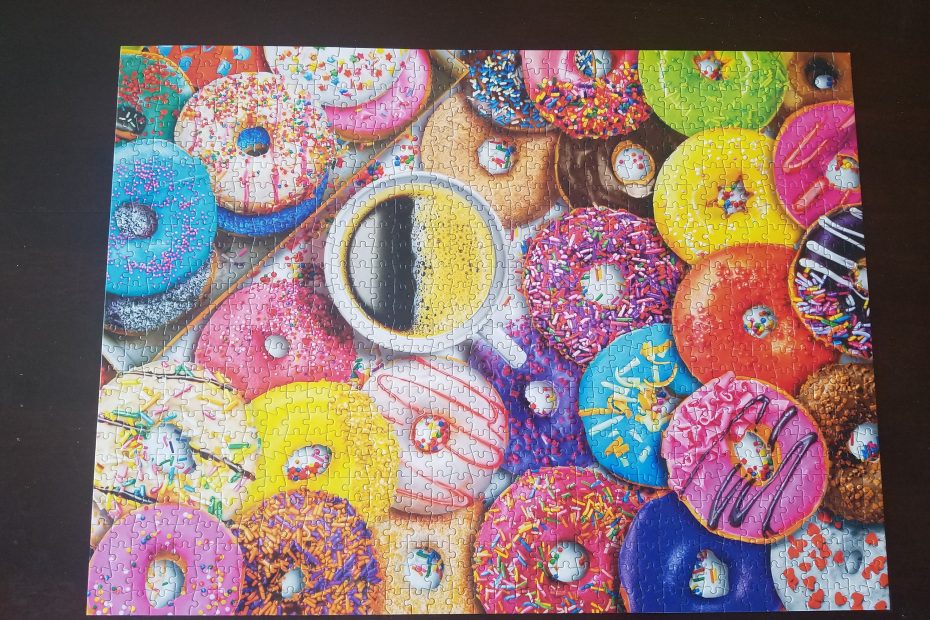 We finished off Aimee Stewart’s “Coffee & Donuts” from Buffalo Games last night, joking that, between this and “Talkin’ All That Jazz,” we’re working to get our average time to finish back up after taking so long on the Detroit map. 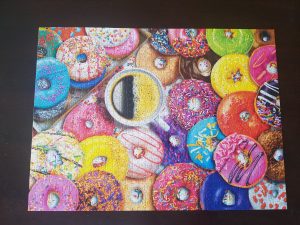 As I mentioned in the next-up post for Coffee & Donuts, the pieces were nice and solid, locking together well.  The finish was good, too, so kudos to Buffalo Games on a well-constructed puzzle.  I’m looking forward to the others we have from them in our queue.

The artwork was fantastic, with such great, bright colors.  One thing that was interesting, though, was that there were spots where what looks like the same set of three “sprinkles” were re-used. 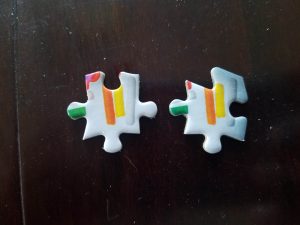 We built this by starting with the edges, as per usual.  From there, Jenny started on the coffee cup while I put together some of the individual doughnuts.

Along the way we started sorting the pieces by color.  We usually try to find the general location of a piece but in this case we basically treated each doughnut as a separate mini-puzzle, then transplanted it into the main puzzle.  We did some of that with “Talkin’ All That Jazz,” too.  Both puzzles have large, clearly defined blocks of color, and were constructed well enough that we could build a section on one side of our table and move it to the other, so it makes sense.

As we neared the end, we suspected that we’d lost a piece, which was a concern because (as mentioned in the next-up), there was at least one piece that had tried to escape the box and we couldn’t know if there were any others.  Sure enough, with no loose pieces left on the table, we had one gap left in the puzzle. 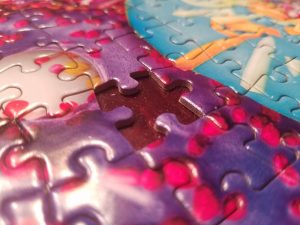 Coffee & Donuts with one piece missing

Thankfully, after crawling around on the floor for a minute, we found it flipped over and blending into the carpet. 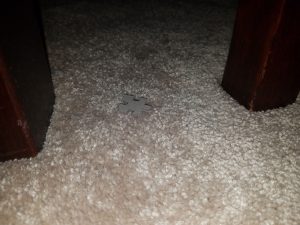 The final piece of Coffee & Donuts, upside down on the floor.

This was fun.  There’s not a lot of meaning to this one but there’s not always going to be as we crank through these too quickly to stick to designs that are significant to us for some reason.  It’s cheerful and well-constructed and that made it fun.

Programming Note: This week we made a change to our Twitter handle.