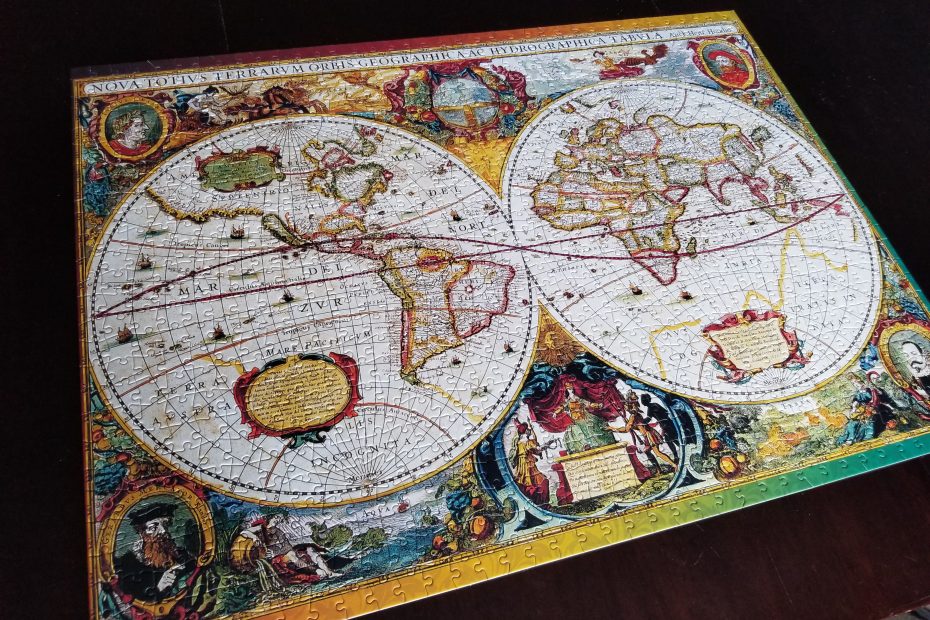 Well…  That was much faster.

“Antique Map” by Buffalo Games was meant to be a palate cleanser of sorts and, having wrapped it up on our respective lunch breaks today, it worked perfectly for that purpose.  It was a lot of fun and it looks gorgeous. 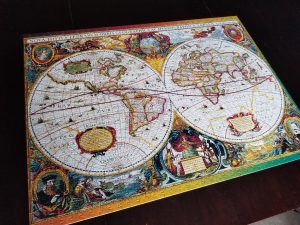 The interesting thing about this design, to me, is that it’s clearly based on the 1630 map by Dutch cartographer Henricus Hondius but it looks like the colors and detail have been deliberately altered to give it a more aged look.  A well-preserved version of the map is actually much brighter.  I wonder if that was a deliberate choice by Buffalo Games or if they were working off of a reproduction that already had those changes or just how that came about in general.

We started with the borders, as per usual, then moved to the banner across the top (which translates to “A new complete map of the geography of the earth and oceans”).  After that, Jenny focused on the red lines of the equator, then the yellow and orange lines of the Arctic and Antarctic Circles and the Tropics of Cancer and Capricorn.  As she found pieces for the Arctic Circle, we found ourselves yelling out “Bear Circle!” (and “No Bears Circle!” for Antarctic Circle pieces).  Meanwhile, I worked on the text insets, then moved on to the borders of the map itself, before filling in the portraits and vignettes outside of the map.

We wrapped it up by filling in the rest of the map together.  That last bit was a little tricky because the proportions of the map are all weird and everything is labeled in Latin.  Some of those Latin names are still familiar now (Hispaniola, for one) but some were less-useful.  Then there are ones in the middle, like Barbaria, where I thought, “Well that’s just mean.  Oh, wait, they mean the Barbary Coast.”

It was great to get back to a puzzle that had a lot of detail and it just felt nice to be able to snap pieces in place and know that if one fit, it was in the right spot.

There were some production issues we noticed, where some pieces had kind of split in layers.  Part of the back of one piece would still be stuck to an adjacent piece.  It didn’t impact the difficulty of the puzzle or how it looked but we did have to place them in the right order so that the back didn’t overlay the front, which meant shuffling things around a couple times.  Hardly the end of the world.

We’ve got two more Buffalo Games puzzles left in our queue but I think we’re going to hold off on those for a little bit and try some different things next.