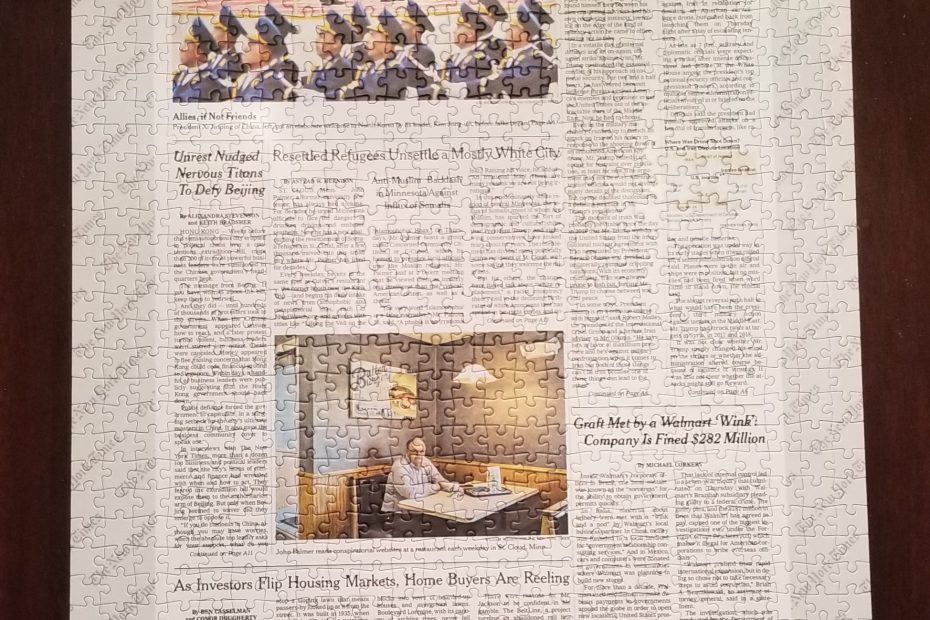 That was fast. It took us a little over 24 hours (Sunday to Monday), with a work day in there, to finish up this puzzle. There was a lot that was different about this puzzle. The text was bigger because it was a bigger puzzle, not a puzzle the same size as the previous one like we were expecting – with smaller pieces. The pieces were the same size, but there was also an added side bar to each side that was surprising. I was kind of annoyed, and wish the front page had been full bleed. I suppose it was probably basically NYT staking claim saying “YES. THIS IS OURS.” 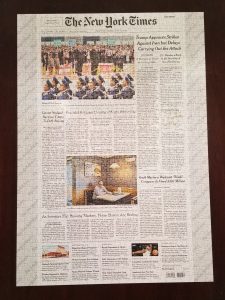 It was a fun, quick puzzle and it was nice to have two relatively quick puzzles in a row. I don’t have any issue with a puzzle taking longer, it’s just a nice change of pace from the Patternography puzzle. The pieces fit really well together, and it made it a lot easier to move chunks around as we finished them outside the border and placed them roughly where we thought they should be based on the poster that was included. Which, funnily enough, even though the puzzles were different sizes, the posters were the exact same size.  🤷🏻‍♀️

Clark’s Birthday Puzzle and Our Anniversary Puzzle side by side

The posters of both puzzles side by side

So, because of the added grey side bars on each side of the page, this one went together just a touch differently. I did the edges, Clark did the masthead, then he started photos and I did headlines. He started working on article text while I did the mini-headlines from the inside sections at the bottom. Once we finished the articles we finished up with the grey border that was two and a half pieces-ish deep, so we had a full column of grey on each side to finish.

As fun as it was to have the pieces click nicely into place, some of the articles were infuriating to look at, reminding us that not all the memories of that day are good. 😒

Fortunately the good memories of that day are really good.

A bunch of golden oldies, from Billie Holiday to Sinatra to Louis Armstrong. You look at the words “New York” only so much before “New York, New York” gets stuck in your head and you have to get it out!