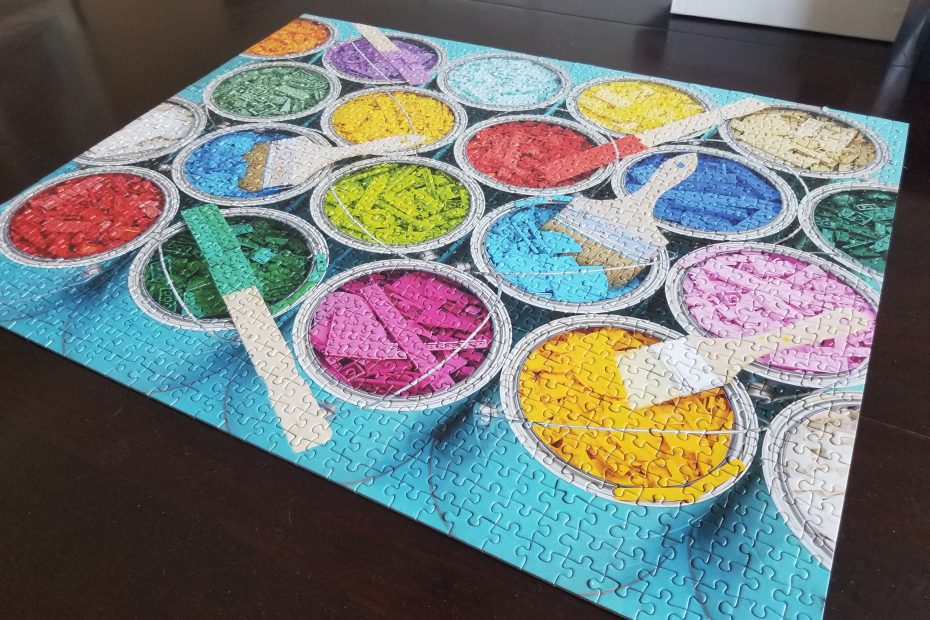 We had a bit of a busy week so this one took a little longer than it probably should have but we’ve completed Lego Paint Party by Chronicle Books. 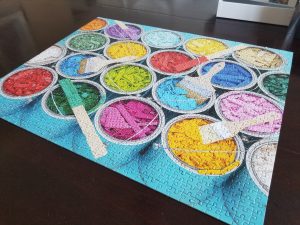 There were a couple interesting things worth noting with this one.

A lot of the pieces came slightly damaged, with the front peeling off of the backing. Or is it the other way around? Either way, that was just kind of disappointing to see. 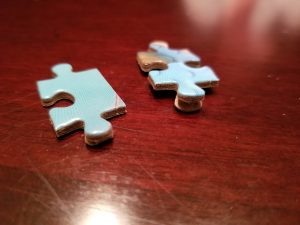 After finding a few pieces like that, Jenny commented, “Well now we know why it was on sale.”

Perhaps related to that, the cut of the pieces just felt… Weird.  They locked together nicely but it was almost like the edges were rounded in a way that made the picture look like it didn’t line up properly.  That took a little bit of getting used to.

Additionally, there seemed like there were differences between the box photo and the puzzle itself.  Colors that were off just a little bit.  Shapes that didn’t quite match.  Like the box image was a photo of the puzzle that wasn’t taken straight-on.

All that said, it was still a lot of fun.  It was interesting to find images of certain Lego pieces on a puzzle piece and then find where that Lego piece was in the puzzle, almost like doing Lego itself.

The puzzle went together about the way we expected.  We lost track of a couple edge pieces in our unboxing (they turned up later) so we didn’t quite get the edges done before moving onto the paint cans themselves.  Some of the different colors were similar enough to each other that we each ended up working on several cans at a time, dropping the finished can in where it belonged.  Then we filled in the spaces in between the cans and wrapped up with the sides of the bottom row of cans.

I don’t think we’re going to rush out and buy another Lego puzzle (especially with the stash we’ve already built up waiting for us) but I wouldn’t be against giving another one from this series a shot.  I also won’t feel bad if we never do that.  If it weren’t for the novelty of Lego, this would probably be a bottom-tier puzzle, but that novelty is important.

Jenny started noting our soundtrack last time so I’ll include it as well.  We mostly worked in silence but did spend one night listening to episodes of NPR’s “Ask Me Another” podcast from the summer.  NPR cancelled that show and they aired their last episode while we were working on this one but we’re months behind so we get to pretend like one of our favorites is still around for a little bit longer.