Next Up: Jack O Lanterns 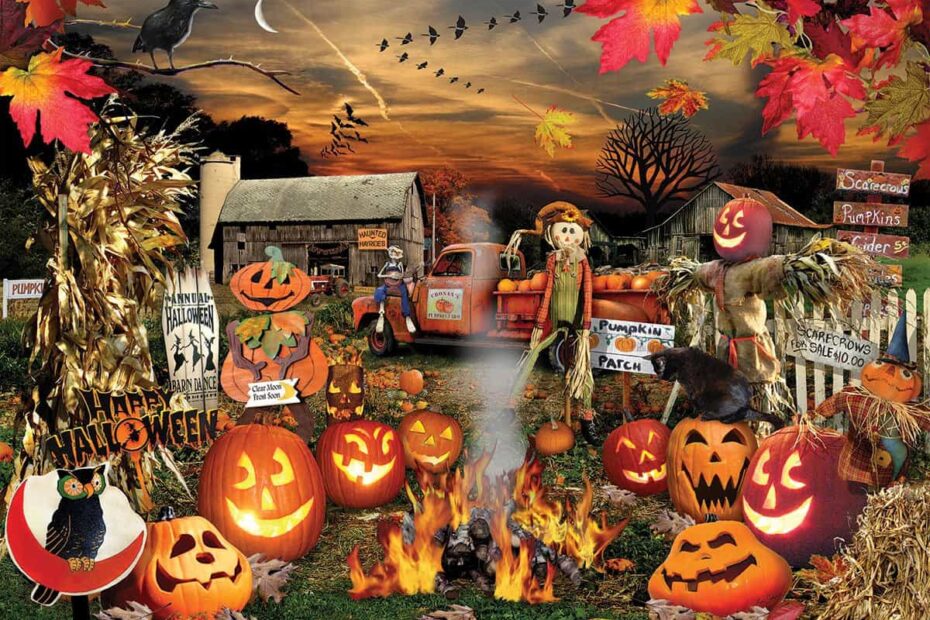 As we wrapped up “Lego Paint Party,” before Jenny had selected “Bengal Blue” as our next puzzle, I took a look at the puzzles I had contributed to our queue and was shocked to see that there were only two left.  I ended up being wrong about that but it didn’t stop me from looking for a puzzle company we hadn’t done anything from to find something new, which led me to White Mountain Puzzles and “Jack O Lanterns.”

Actually, I was wrong twice.  Once because I didn’t have two left in my side of the queue, I had three.  The other because White Mountain isn’t new to me, as I later recognized their “Presidential Stamps” puzzle as one that someone brought into the office I used to work in and we all collaborated on. 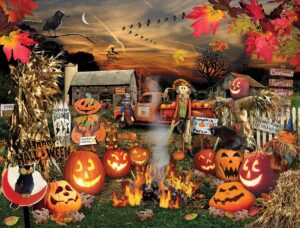 This one is still appropriate, though.  Not only will we be completing it in October, leading up to Halloween, but we’ve been puzzling while watching our friend Christina’s Twitch stream and she’s focusing on “spoopy” games this month.  So we’ll do our spooky puzzle while she plays her spoopy games.

One thing I’m curious about is the fact that this is advertised as having larger pieces.  It’ll be 30″ x 24″ when completed and the last rectangular one we did was 26.75″ x 19.75″.  That doesn’t seem like there’s enough room for the pieces to be significantly bigger, and I didn’t notice a difference when I opened the box to eyeball it.

This looks like it’ll be a pretty standard effort from us.  Start with the edges and work from there.  I think I want to do the sky after that; the sky, the leaves, and the pumpkins themselves jump out at me as things that we might be able to get done quickly.  We’ll have to see how that goes.