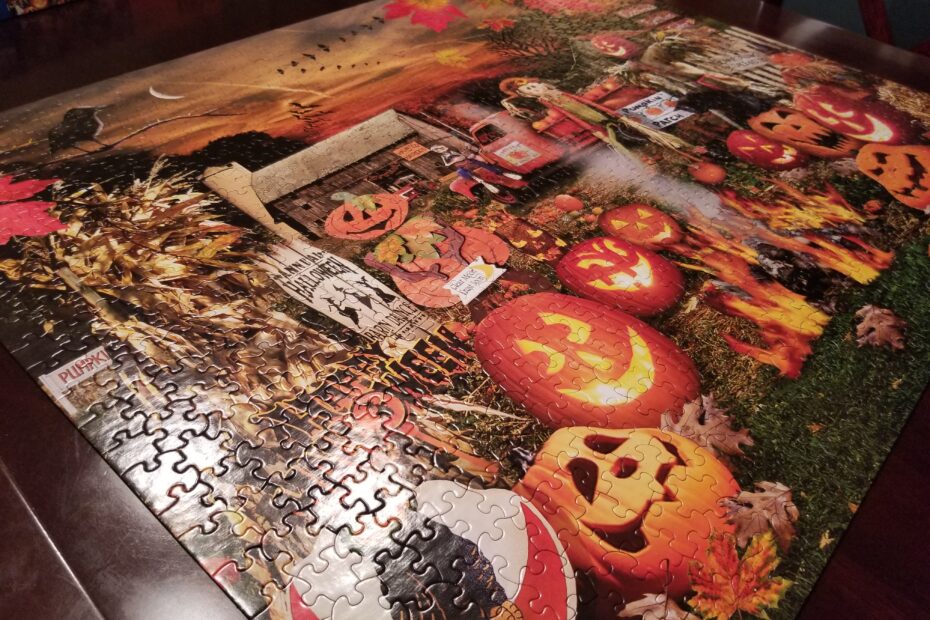 With plenty of time left before Halloween, we wrapped up the spooky “Jack O Lanterns” by White Mountain Puzzles. 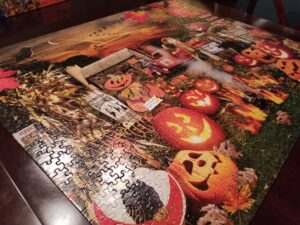 The question I had going in was how the larger pieces would feel.  The word that kept coming to my mind as we completed the puzzle was “Duplo.”  I’m not sure that’s a good or a bad thing, necessarily, it was just a little weird.

Aside from that, the puzzle was well constructed.  The pieces locked together very nicely and, while it might have been a little glossier than we’d prefer, the print job was clear and bright.

The negative was that, as the puzzle came together, it became clear that the design was just a bunch of individual elements photoshopped together.  The angle of light was inconsistent.  The flames from the fire were unnatural.  Objects overlapped in unexpected ways.  It actually made putting the puzzle together a little difficult because it felt like our eyes were tricking us.

So it was fun but I’m also a bit disappointed.

As expected, we started with the edges, then I moved on to the sky.  I had thought that the sky would be easy because the leaves in each corner looked like they would come together quickly.  It ended up being really slow going at first but eventually went faster.  Jenny worked on the signs and the grass.  Our daughter joined us to work on the jack o lanterns a bit.  The fire was the last major element done, then we filled in what was left.

We’ve got two more White Mountain Puzzles in our queue so I’m curious to see how their artwork compares but I don’t think we’re going to get to them right away.

As I mentioned in the Next Up post for this one, we planned on working on this while watching our friend Christina’s Twitch stream, syncing up our spooky puzzle with her spooky video gaming.  When she wasn’t streaming, we had a random Google “spooky music” playlist going, which sometimes wasn’t actually that spooky.