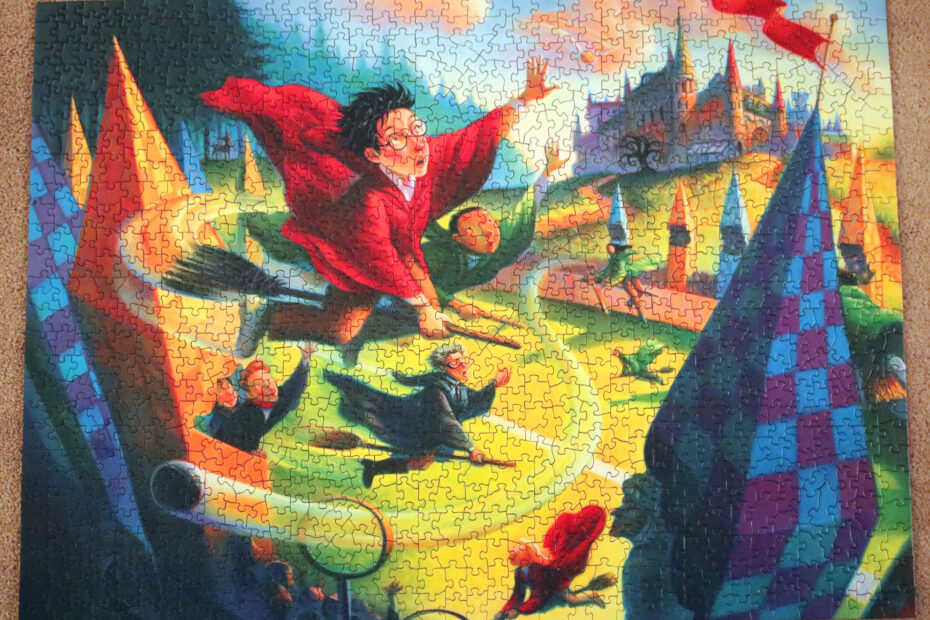 We took a little longer with this puzzle than we usually do. It was hard to get going on this puzzle, not really sure why. I think I had issues in part because, as I mentioned in next up, we did the edges and I set about putting the tents together. They were not as distinctive as I was hoping with the weird cuts of pieces. I spent a lot of time on those freaking tents. I collected all of the pieces I could tell were tents and then set about trying to figure out which colors went with which tent. 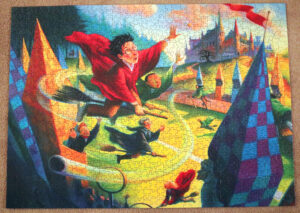 While I worked endlessly on the tents, Clark worked on Harry and figuring out what the heck was happening with the sky. We didn’t quite finish the borders before starting the rest of the puzzle. The border of the sky next to the forest looked weird the whole time we were doing this puzzle. We think it was just not willing to lay flat because as Clark filled in more of the sky, it became apparent we had them in the right order.

Our daughter helped with this as well, she actually found a forest top border piece that we had missed — and we were about 60% of the way finished with the puzzle! The kid has a good eye, what can I say? We also had a night where we were out and Clark’s dad did a little of the border. Apparently the kiddo told him not to, but he did some anyway!

We listened to some spooky music through October, then we switched to whatever Google Radio would play after we started the station with Jefferson Airplane’s White Rabbit. We both are looking forward to the new Matrix movie, and the trailer that dropped awhile ago used that song and we loved it.

Once we got moving and adjusted back to the bizarrely cut pieces, it came together nicely. I’m still concerned about the issues of laying flat though. It never felt like we could really make it lay flat and really enjoy the effect of the linen finish that NYPC uses.

Stay tuned for the next one – and stay puzzled!