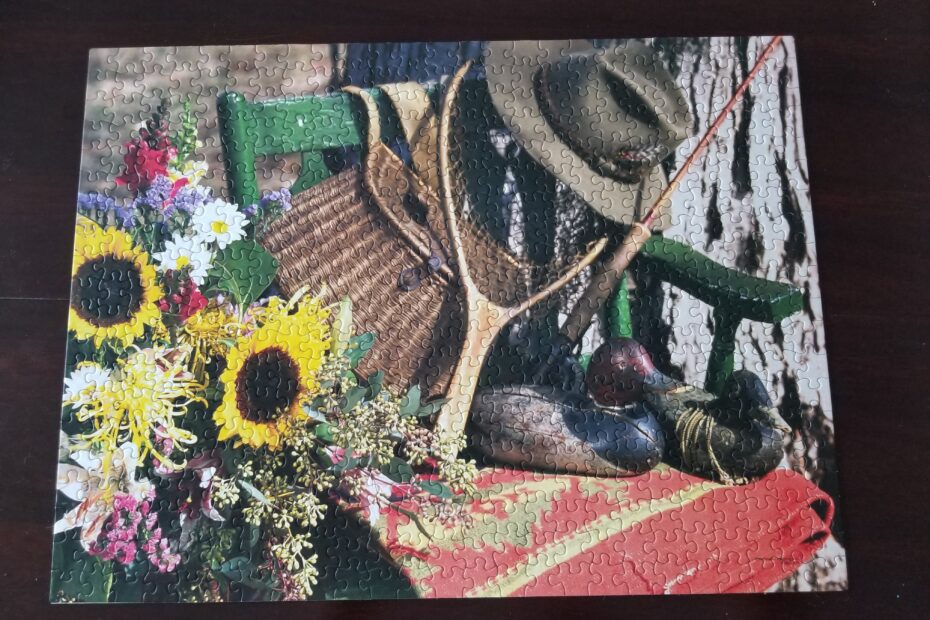 In mid-October we got a message from Jenny’s mom with a picture of the box for a random 500-piece puzzle, asking if we wanted it.  We didn’t but she also sent a message about a lasagna recipe – which Jenny replied to, forgetting to mention the puzzle.  So we were surprised to receive a puzzle when we visited with Jenny’s family on Thanksgiving.

Given that it had no meaning to us and it’s only 500 pieces, we decided to use it as a palate cleanser after finishing “Harry Potter Quidditch,” figuring that we could crank it out in one night, maybe two.  It ended up being two. 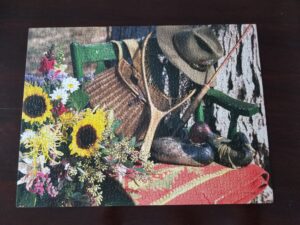 Jenny’s mom had completed this puzzle before passing it on to us and, in taking it apart, bagged the edge pieces separately from the rest of the puzzle, so we had help in the form of that.  From the edges we went to the blanket at the bottom to the flowers.  It really came together quickly after that.

I tried to find out what this puzzle is called but there’s seemingly nothing about it on the Internet.  It was made by Milton Bradley under a Hallmark license sometime between 2005 and 2019.  We know the first date because it’s the copyright date on the box.  The second is a note written on the box, saying that it was completed on April 22. 2019, by E.T. and Ed.  We have no idea who they are.  There’s also a “50¢” sticker on the box so it probably was in a garage sale at some point.

While this was a nice break and mystery of the puzzle’s origins is interesting, we’ll be on to one from our queue next.