Next Up: Sherlock Holmes 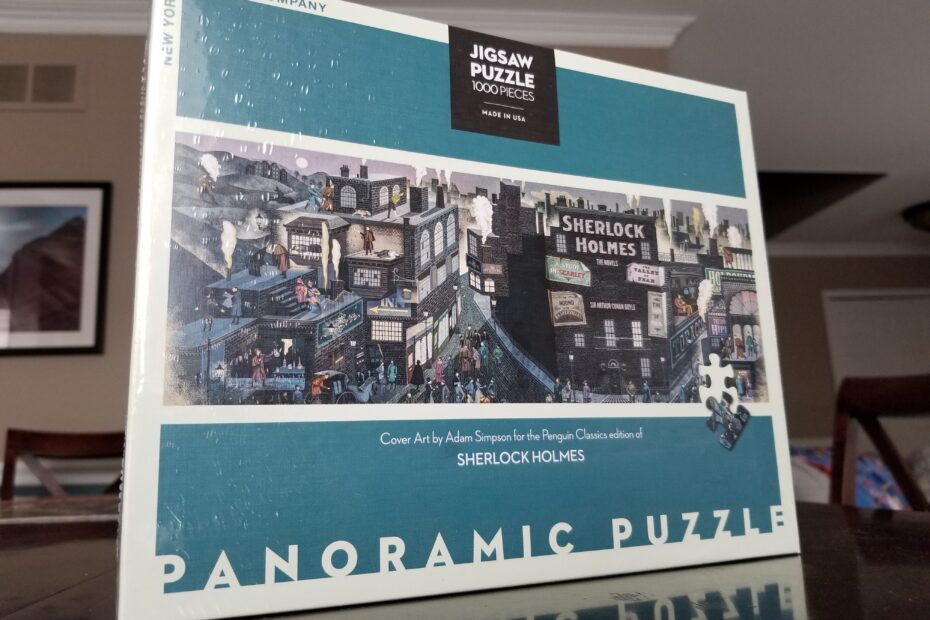 After Jenny picked “Harry Potter Quidditch” as our last puzzle in early October, I’d decided that the shadowy, dark design of New York Puzzle Company’s “Sherlock Holmes” fit the Halloween season nicely and would be our next puzzle.

And then “Harry Potter Quidditch” took over a month and spooky October became snowy post-Thanksgiving November.  So much for fitting the season. 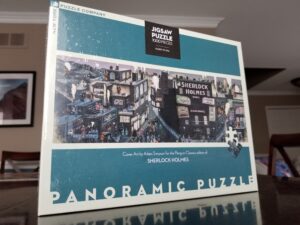 We love NYPC’s quality and their unique shapes but one of the difficulties we’ve had with the Potter puzzles is that they feel low-resolution (I know it’s intentional but I have no idea how to describe it in an analog fashion).  As such, the art on each individual piece comes across as blurry, making it hard to match things up.  That’s not a bad thing, the art is gorgeous once completed, it’s just a challenge (and these are supposed to be challenging).  I don’t remember having that problem with “Video Games Collection,” though, so I’m curious to see if we have it with this one.

Another thing I’m interested in is the panoramic aspect ratio of “Sherlock Holmes.”  It’s 39″ x 13″ and I wonder if that’s going to change how we look at it.  Ages ago, pre-blog, we did a panoramic puzzle of an in-game photo from a Detroit Red Wings game.  I don’t think we tackled that one any differently.  But we did manage to lose a piece that stayed lost until Jenny moved out of that house, so hopefully we can at least avoid that this time.

At the very least, that aspect ratio will make it hard for us to store this once it’s done, as it won’t fit in either of the portfolios we currently stash completed puzzles in.