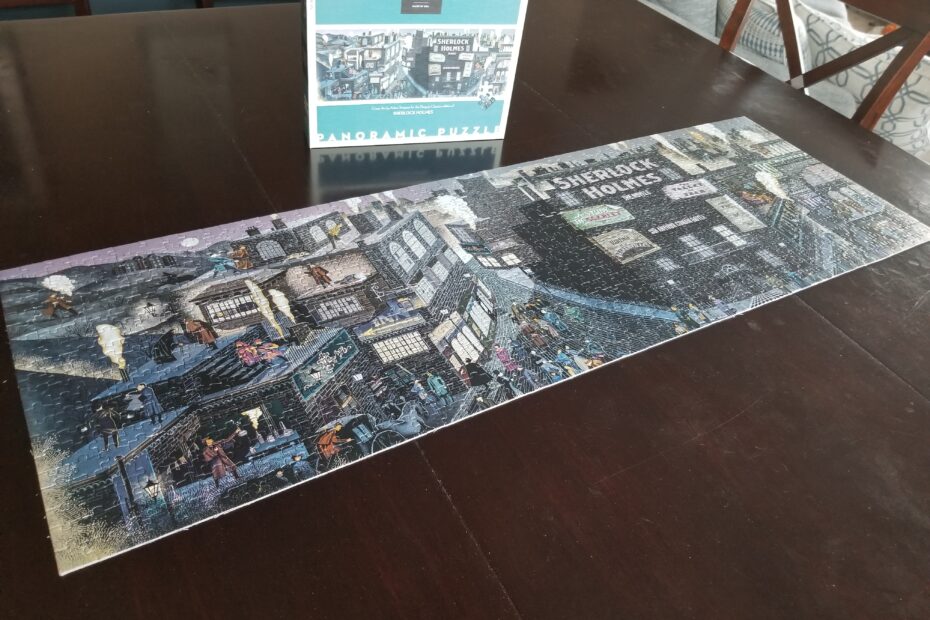 After about a week of actual effort (the Next Up post for this one was published several days before we actually started work on it), “Sherlock Holmes” by New York Puzzle Company is done.

I’d questioned how the art style would lend itself to solving the puzzle, coming off of a couple Harry Potter puzzles from NYPC. Specifically, I’d said that the Potter puzzles felt “low-resolution” (having used that term because I don’t know the proper one for what was clearly a style choice by artist Mary GrandPré), with soft edges that sometimes made it difficult to match pieces together. “Sherlock Holmes” – with art adapted from the cover of the Penguin Classics collection, originally by Adam Simpson – was not done in that style, thus confirming that it was the artist rather than the manufacturer driving that.

I’d also wondered if form factor of this panoramic puzzle would cause us to change up how we worked on it at all. In short, no. That said, it did feel – to me, at least – like we were fighting for space to work a little bit more. The way the puzzle took up space on our table, there wasn’t as much room to the sides to leave loose pieces, so things were just organized differently in a way that threw me off a bit. I found myself reaching across the puzzle for pieces more than usual.

Perhaps the biggest difference with the panorama is that it was more difficult to shoot photos of, as we’ve already got glare issues with our table and lighting and needing a wider angle to fit the full width of the puzzle in was a bit too much. To get a view from straight above, I had to put my phone in the chandelier over our table. 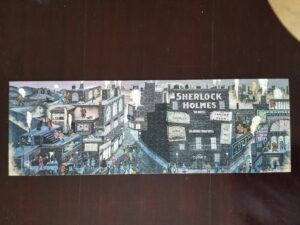 That’s a lot of words to say that none of the “problems” with this puzzle were actually problems.

As far as actually completing the puzzle goes, it did feel like we bounced around a little bit. There were lots of little pieces to focus on. Text and windows and plumes of smoke. Eventually that gave us enough that we could start filling in the gaps with bricks and people. The final part was solid black.

I liked this one a lot. It’s gorgeous and it was fun. Now we just have to figure out how to store it.