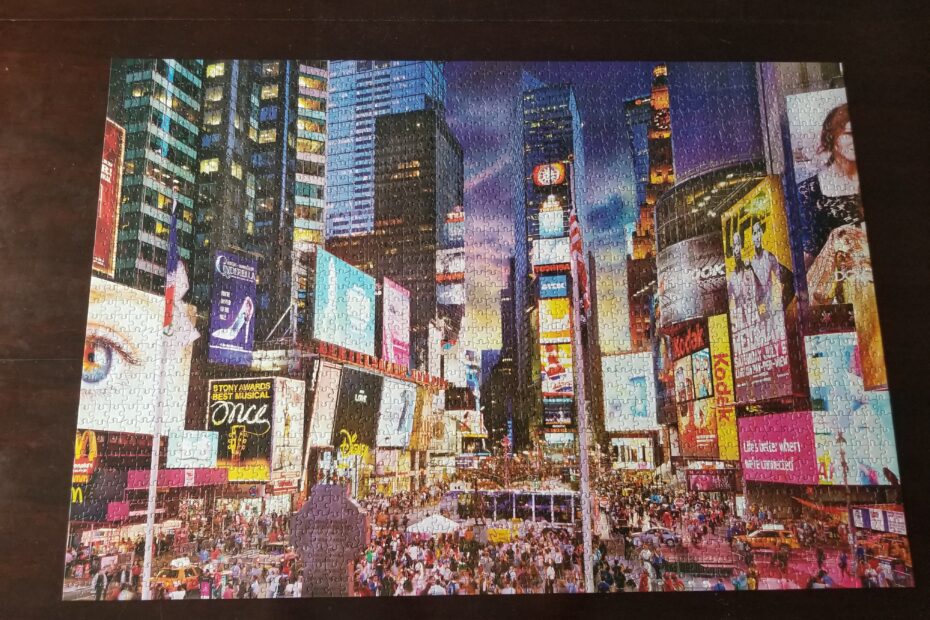 It’s midway through February and we’ve finally wrapped up “Times Square” by Buffalo Games, which we picked because we thought it was appropriate for New Years Eve/Day. Given that we didn’t actually unbox it until mid-January and it was our first 2000-piece puzzle, I think we did okay on this one. 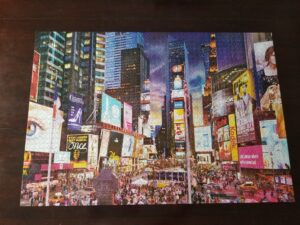 We learned a couple things right off the bat with regards to the puzzle size and how we like to do things.

Our first step is usually to take out all of the pieces and flip them right-side-up, sorting the edge pieces out along the way (and further sorting the corner pieces from there). Then we take those edge pieces and build out the outer border so that we can get a better idea of where individual elements in the puzzle go. Ideally, the interior of the puzzle remains empty until we find a piece (or group of pieces) that we are certain belongs in a specific spot.

With our 52″-square table, that works just fine when we’re doing a 27″ x 20″ puzzle but this one is 39″ x 27″ and we just didn’t have enough table space to fully assemble the border and still keep the interior empty.

So we pieced together parts of the border, then moved on to putting together some of the larger signs, trying to “use up” enough pieces that we had enough space to finish the border. Eventually that worked out.

One thing I noticed, though, is that we seem to have a tendency to stall out when we have the border in place and nothing else. If we sit down, sort the pieces, assemble the border, and immediately move on to working on the interior of the puzzle, we’re likely to wrap that puzzle up quickly. When we sort the pieces, assemble the border, and call it a night, though, it feels like it’s harder to come back to the puzzle. I don’t have any data to back that up but it’s something I’ll be keeping an eye on.

I had wondered at the start if the puzzle being 2000 pieces would change how we do things and, aside from space-related issues, it really didn’t. It was very similar to the “problems” we had with the “Sherlock Holmes” panorama from last fall, where things were just “off” just a little bit from our usual setup in such a way that slowed things down. For example, I spent a lot of time working on crowd in the bottom half of the puzzle while Jenny worked on the buildings and sky in the top half. That meant that we were kind of locked in on our respective sides of the table. But that didn’t mean the pieces we needed were on that side of the table, so it was easy to get tunnel vision and forget to check all of the pieces.

This one reminded me a lot of the Detroit map puzzle we did around this time last year. There weren’t a lot of pieces that you could pick up and immediately recognize where they belonged, especially on the buildings or in the crowd. So it was a matter of picking a piece, then comparing it to the box to figure out exactly which person’s head or which window or which traffic light it was, much like picking exactly which intersection the map showed.

None of that is a knock against the puzzle. As per usual, this was a lot of fun and looks gorgeous.  Buffalo Games remains one of our favorite manufacturers.