This wrap up is coming a liiiiiittle later than I expected, it’s been a crazy week here! So, on March 2 we wrapped up the German Windmill puzzle, that we hypothesize that I’ve been moving around with for the last ~22 years in 4 hours, 44 minutes, and 5 seconds. This is the first time we have set an official timer to doing the puzzle. We usually work on a puzzle until we feel like doing something else, we might pick at it during our lunch hours, but this one we made sure we were always working on it together and had a timer going. 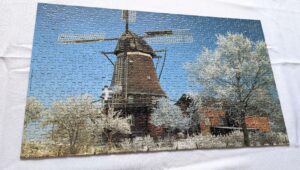 At the beginning it felt like we were rushing because of the timer, and once we called that out, we slowed to our usual pace. We had a GoPro that we tried to use to record, but it kept falling because of the way we had to attach it to the chandelier over our table. The camera meant we had to do the puzzle in the table’s center and lean the whole time over a tiny puzzle. We also tried putting a white tablecloth down to help with the glare on the table, but it just kept moving around and the puzzle (which already didn’t have a good fit) wouldn’t stay together well. I spent a long time on the border at the top because the pieces didn’t fit well and could go in multiple different alignments. Eventually we got them all in the right places, but it was tough.

When we finished the puzzle, we initially thought we had four pieces missing, but after we checked the floor (much later than we should have!) we only had one missing piece – not bad for a 23 year old puzzle. 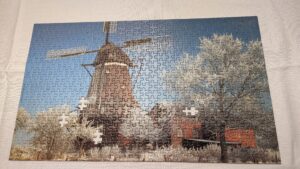 So, changes for next time: not having the tablecloth underneath. That’s the main one. We might do the timer again, and the camera, but probably not every time. I would like to get a good time lapse video of us doing a puzzle sometime, but it doesn’t have to be this one.

This is a wrap on puzzles I’ve found in my boxes of stuff as I go through them, so stay tuned for some new puzzles!