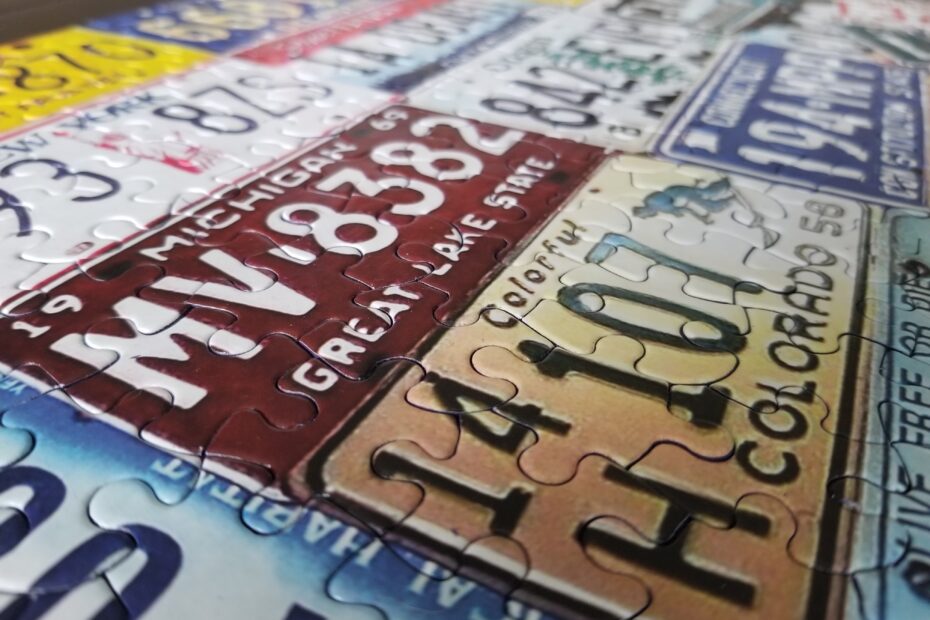 We posted the “Next Up” for “License Plates” by White Mountain Puzzles on March 14.  Then we didn’t touch it for almost three weeks.  Oops.  Yesterday we finally opened it up and we ended up cranking it out in a single night. 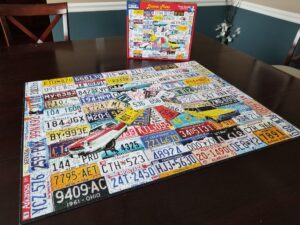 As I said in the Next Up, I’ve always loved license plates, so this was a lot of fun.  I was disappointed that some states had multiple versions of their license plates (New York, Alaska, and North Carolina, for example, each had a retro plate and a modern one) while our home state of Michigan was only represented by the 1969 maroon “Great Lake State” (twice).

We’ve had trouble recently where we’d get a puzzle started, then step away, then be slow to get back to it.  I think the fact that we set aside enough time to not just unbox this puzzle but also spend some time getting it started is what helped us keep up the momentum and get it all done in one sitting.  We’re going to have to keep that in mind for future puzzles.

Of course, the design of the puzzle also made it a little easier, as each license plate was kind of a mini puzzle of its own, which we’ve seen in other puzzles (notably “Talkin’ All That Jazz” by Apostrophe Puzzles).

We like to keep a look out for “weird-looking” pieces.  Sometimes you get a whole puzzle made of them, sometimes you just get a handful of them.  This puzzle was interesting in that we found exactly one. 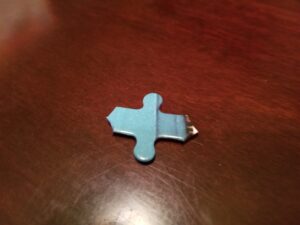 An oddly-shaped piece from License Plates

While I still think White Mountain’s larger puzzle pieces just feel weird, this puzzle made me feel a lot better about the quality of their products after disliking “Jack O Lanterns” last fall.  We’ve got one more from White Mountain that we’ll get to eventually.

Our soundtrack for this was a random classic rock playlist.  As we’ve done before, we told our Google Home to start with “White Rabbit” by Jefferson Airplane and went from there.